The Bloodstone is widely regarded as one of the most beautiful of gems, with regards to its looks, it’s talisman qualities and healing energy. Also known as the Sun Stone or Christ’s Stone, the Bloodstone has a wide range of unique qualities. When you wear or carry the Bloodstone it aids in protecting you against verbal and physical aggression such as bullying, it will also provide the strength and courage to push through the anguish and become a stronger person.

As a stimulant, the Bloodstone is one of the best, this gem will stimulate the immune system to ward of such illnesses as the flu and a cold, while re-energising the body after it as been worn down from illness. 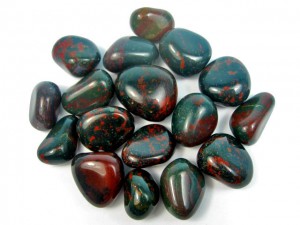 The Bloodstone meaning in Greek mythology is “heliotrope”, when translated means Sun Turning, derived from the ancients placing the bloodstone so the rays of the Sun caught the gem and the reflection on the Sun would appear to be blood red. The Bloodstone is generally a dark Green colour with specs of red, which have a likeness to drops of blood.

Because of the healing properties of this gem the ancients ground up the Bloodstone and mixed it with there foods so the healing powers could start from within, helping to heal tumors and bleeding wounds. In short, the Bloodstone is am amazing find in the spiritual healing world, it’s stooped in ancient history and has been used for centuries for many things including physical healing, emotional healing, chakra healing, feng shui, balancing your spiritual energy, it’s uses with meditation are second to none aiding with the harmonious and calming energy needed for meditation.

Best worn as an amulet or talisman, The Bloodstone’s natural steady calming energy will align itself with the unstable energy of the human mind. Bloodstone Meaning – Healing and Spiritual energy, Positivity and Calming properties.