The Healing Properties of Clear Quartz

Although clear quartz may be among one of the most common minerals in existence, its range of healing properties distinguishes it as a powerful crystal with the ability to channel and amplify energy.

Often described as the ‘master healer’ of the crystals, it not only absorbs energy but it also balances and revitalises both your physical and mental well being.

It is believed to be effective in tackling a number of medical conditions including arthritis, diabetes, migraines, digestive problems and chronic fatigue. The stone is also reputed to help restore mental clarity and is particularly useful for those suffering from depression.

Modern day healers also believe that the mineral is capable of soothing painful areas on the body and that it can actually draw away pain. 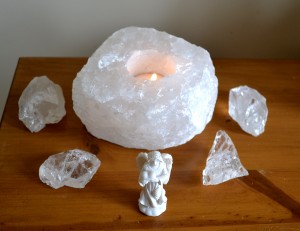 As well as proving effective in assisting with physical conditions, the stone also possesses emotional healing qualities and is used as a cleanser by stimulating positive thinking whilst combatting negative energies.

It is also renown for enhancing psychic abilities and has long been used in the manufacture of crystal balls.

Clear quartz is considered to be a programmable mineral and that by instilling it with positive affirmations, the crystals can be used for any intention, thought or emotion.

It is recommended to wear or carry the crystal on your person so that it can provide an immediate lift when needed.

Many cultures throughout history have prized the mineral for its healing and meditative properties. There are many different varieties of quartz and it comes in a wide spectrum of colours including Rose, Blue and Amethyst Quartz.

Although clear quartz may look on the surface to be quite ordinary, its powers are extraordinary and they are clearly an important metaphysical tool in ensuring personal well being and the ability to connect to your higher self.