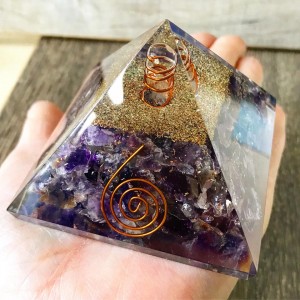 In the early 1900s, Dr Willheim Reich researched a subtle form of potency, which he christened orgone. In his findings, he discovered that by agglomerating and catalysing different proportions of metals, quartz crystals and an organic resin, he could develop a dominant force. A force too vigorous that it could attract and refine etheric energy. He further noted that the dynamism is omnipresent, meaning that it can be found in every aspect of nature. Today, in addition to its original name, it is also known as Chi, the Fifth Element or Prana.

As mentioned above, orgone is composed of various elements. The organic resins are often based on petrochemicals, while the metals are primarily fillings. These make up a significant portion of the mix. However, if the addition of a quartz crystal were to be excluded, the mixture would be incomplete. This is because when pressure is applied to the resin during the curing process, it typically shrinks, hence the need for the quartz. Also, quartz possesses piezoelectric tendencies, enabling it to generate charges when pressure is intensified. 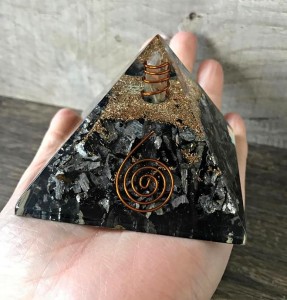 The elements within the chi are polarised by the charge produced by the quartz crystal. They acquire different charges, resulting in constant and continuous repelling and attraction. This enables the pyramid to function autonomously, incessantly generating positivism. The shrinking of the resin intensifies the pressure on the quartz, perpetuating the process of energy generation.

Over the years, there has been widespread use of subtle potency as an alternative form of conventional therapy. Though their nature renders it virtually impossible to quantify them using scientific methods, records show that this type of medication works. Some even say that they have no side effects.
Through its power production, chi can transmute energy, changing it from negative to positive. This, in turn, has continuous effects on the human body, and its health as a whole. Some of the documented benefits of chi include:

Several users have reported that after starting using the substance, they started feeling better. Their temperament has improved, they have become more jovial, and harmony with other individuals has gone up. Purportedly, this is because orgonite clears emotional blockages within the body, which build up when we encounter adverse situations in life.

To live in accord with others, you must first of all be at peace with yourself. The substance clears your mind of all negativities, making you a friendly and welcoming individual. This enhances interactivity, leading to better and lasting relationships. 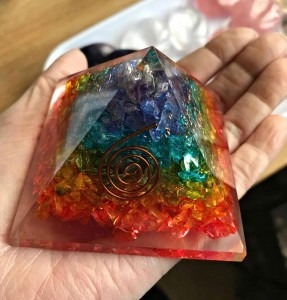 Among the leading causes of insomnia is stress. Lack of sleep takes a toll on the affected party, making them perform dismally in nearly every activity they undertake. Chi takes care of this, as it has been proven to cure even the most persistent of insomnias. However, using the substance at the time of sleep may be problematic for some at the initial stages. Nonetheless, with time, everybody gets accustomed to it.

We live an era where everything we use is electronic. A majority of these appliances, such as TVs, radios and microwaves generate electromagnetic radiation, which has an adverse impact on our health in the long run. While chi does not eliminate EMF, it alleviates its effect on human body. This protects from conditions triggered by continuous exposure to such radiation.

Placing drinking water over an orgonite pyramid cleanses it. With its particular charge, the substance can draw out impurities from the water, making it ‘taste’ better.

That being said, it is evident that orgone pyramids have numerous benefits to the human body. A must-have tool to increase productivity! 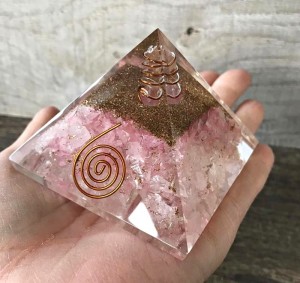 Energy blockages (or blockages of chi or prana) in the body can cause you to feel sluggish, uninspired, fatigued, and irritable. Fortunately, orgone pyramids provide a solution to these issues as they can free up energy blockages in your body and enable your energy to flow smoothly without obstacles once again.

Orgonite is a composite substance, and orgonite pyramids are primarily made up of metals, quartz, resin, and sometimes even flower petals. Orgone pyramids can be extremely ornate and beautiful objects, however all that is really needed to create orgonite is a mix of equal parts metal shavings and resin. As we have just seen, orgonite is commonly formed into orgone pyramids, objects which are used to unblock any blocked energy in your body. 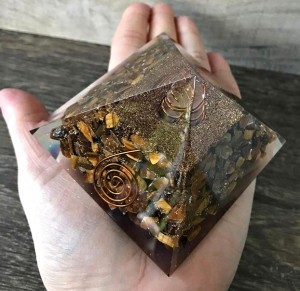 What are the Beneficial Effects of Orgone Pyramids?

Practitioners believe that these pyramids have a healing power that works positively and beneficially on your body’s energy. They have numerous advantages, which include helping you to sleep more restfully and giving you better dreams, reducing stress and giving you a feeling of inner calm, inspiring you, cleansing your body and your life of negative energy, and helping you to meditate more profoundly and productively.

How should Orgone Pyramids be Used?

Orgone pyramids will become attuned to your body. Metals respond to different magnetic and electrical impulses, for instance, whilst any quartz contained in the orgonite will undergo modifications in its cellular structure in response to changes in its environment. Keeping your pyramid close to your body will help it to work most effectively. If you have identified where the energy blockage is located in your body, it can be especially useful if you wear the orgonite on a small, comfortable band over that spot or alternatively if you place the pyramid over that spot as you sleep, or as you meditate. Orgonite has a particular affinity with water, moreover, so you might like to combine the use of your orgone pyramid with some kind of water therapy. Orgone pyramids can be made small enough to carry in your pocket, wear as pendants, or even incorporate into a headband. They can also be made large enough to place in an auspicious position around your home, to cleanse the entirety of your living space. The way that you use the pyramid is ultimately up to you: this is a healing talisman that should be suited to your individual needs. 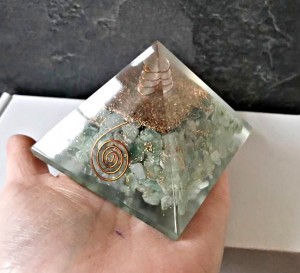 Imbalances in energy can permeate to all aspects of your life, affecting your sleep, your work, and how you relate to other people. As a result, trying out an orgone pyramid – especially in conjunction with other healing practices such as meditation, chanting, or healing sounds – can help to set you on the path to recovery. As orgonite is responsive to your body, moreover, the longer that you have your orgone pyramid, the more powerful its healing properties will become. Many esoterics use their pyramids to heal other people, though it is crucial not to sap their energy too much through overuse. Cherish your orgone pyramid, and it will cherish you in return.

Do you want to know more about orgone pyramids? Then you’ll enjoy reading this article. Not only are these pieces of spiritual crystal orgone jewellery enjoyable to look at and interesting decorative pieces on their own merit, but Orgonite Pyramids also have several subtle effects that will add to your quality of life.

In general terms, you can think of them as filters for negative energy – millions of people around the world have been realizing that keeping a pyramidal orgone structure nearby will help balance their energetic field and make them feel better in different ways, encompassing physical, emotional and mental effects. Let’s see exactly how Orgone Crystal Pyramids will benefit your environment:

Orgone Pyramids are, first and foremost, amazing filters to help clear out negative energy from your environment and transmute it to positive energy. Keeping one of these ornaments around will make it sync to your own energy field, keeping you tuned up to your own natural rhythms. You’ll feel improvements in your physical health as well as your emotional and mental stability, when you learn to use Orgone to your advantage.

Given their energy balancing potential mentioned above, Orgonite Pyramids are often used by people with a spiritual inclination to help them go further in a number of different everyday activities. An obvious example is doing meditation, an extremely useful and essential practice to help you stay balanced; if you often struggle with meditating because you always feel restless, sitting near your Orgone jewel could make things easier for you.

This is actually an indirect effect of the energetic syncing that’s promoted by Orgonite. As your energetic fields grow stronger and more balanced, you will realize many indirect benefits in your life. A typical example is having all around improved sleep quality; you’ll find it easier shut off your mind to sleep and your sleep will be more rejuvenating, with a notably increased incidence of vivid dreams.

Along with improved sleep patterns, you should notice you seem to become a little more impervious to stress. As you grow stronger from a spiritual standpoint, you’ll just find it hard to worry and fret just for the sake of it, and you will start embracing a relaxed poise that will help you get things done better and faster than ever before.

Orgone Pyramids add a great touch to any modern decoration, and they also produce striking effects which are unseen to the eye. If you ever feel like the atmosphere in your house is a bit heavy and dull, try putting a crystal made of Orgone in the center of your living room; things will tend to feel a bit brighter, and people will just act a little more cheerful without realizing the cause.

Many people who are concerned about their health will also put much thought into making sure they drink only pure quality water. To this effect, they’ll often use a plastic filter to help with physical impurities, and Orgonite Pyramids to help with energetic impurities. Keep in mind that water is a natural reservoir for environmental energies, so much of the water we drink is tainted with all kinds of energetic toxins.

If you find it hard to believe that Orgonite will even boost plant growth, you don’t have to take our word for for it. There are several websites on the Internet documenting plant growing experiences with and without Orgonite in the room, and the results speak of themselves. The energetic cleansing effect of these pyramid shape crystals will indeed support plant growth, especially when it’s made of the right materials.

For anyone who read through this article carefully, it shouldn’t be surprising that Orgone Pyramids will also help bring a fresh wind to any stagnant relationships. This is a natural effect of its energetic cleansing; as people in the environment get their emotions and thought processes balanced, they will just tend to act in kinder and more humane ways towards one another.

Spiritual growth is a worthwhile lifelong pursuit, and Orgone Crystal Pyramids can be an interesting tool in your spiritual arsenal. When used right, these lovely pieces of artisanship will do much more than add a nice touch to your living spaces. Remember to keep an open mind when you bring in some Orgonite, otherwise your own negativity may add unneeded obstacles to its energetic cleansing.

Mystic Wish are a mystical magical and healing corner of the internet that just loves Crystals in any sharp any form, crystals for healing or just plain feel good energy have mysterious & spiritual presents spanning back over history article edited by Boyle 11th Oct 2017